Don't sew when you are either sick or tired or both. You may get something done, but there is a good chance that you will mess up.

As in sew the side back lining to the front and the front side to the back, then sew one side front to another side front. So much ripping out, finally got it right but am going to leave the actual sewing of the lining into the coat for another day. One can only handle so much frog-stitching!

Okay, so I have been making progress on my coat. But the warm weather has not been much of an impetus to get it finished. I have been taking my time, doing lots of hand-sewing (which doesn't show up at all). I hand-stitched hair canvas to the fronts, upper back, and all hemlines. I put hair canvas on both upper and under collar and pad-stitched the under-collar. The fabric is really thick and fuzzy, and no stitches showed through to the outside even if I took bigger stitches than just little pricks. ﻿ 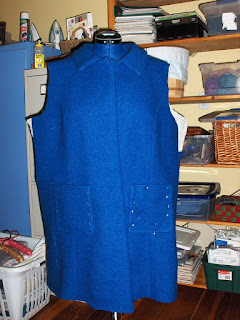 Given the thickness of the fabric, I didn't want welt pockets, I didn't think I would do a good job with them, so I opted for patch pockets. And they are interfaced with hair canvas, then lined, and then hand-stitched twice to the coat so they will be nice and secure without any stitches showing. 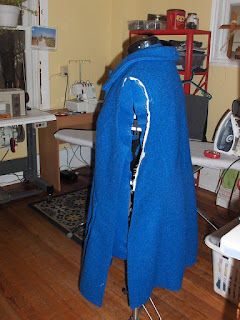 I also added a back stay using linen fabric from the stash. This will help keep the back shoulders from stretching out and will also hide any outline of shoulder pads.﻿ 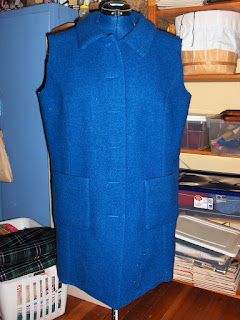 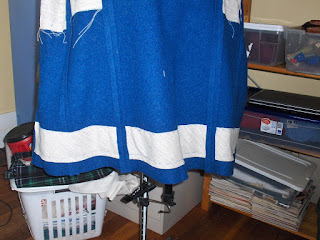 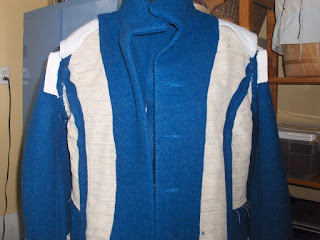 Here is a photo of the inside of the front of the coat, it isn't the greatest photo. But you can see the hair canvas which covers the entire centre front pieces. I also interfaced the side pieces of the front to about 9" below the armholes. And you can see where the sleeves have been put in, I used tie interfacing (since it is on the bias) to ease the sleeve caps and then that interfacing is turned out into the sleeve caps to provide a sleeve header. After that, the shoulder pads are stitched in place. ﻿ 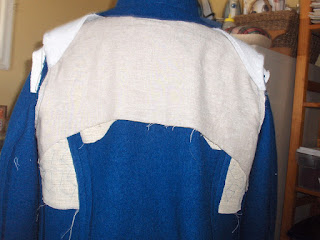 This is the back where you can see the linen back stay which covers the back from neck to under the armholes. Underneath the stay, there is more hair canvas. I tell you there has been so much hand-stitching on this coat. But you know, where I live, winter is a really big deal. It is wicked and lasts for four months of the year. We can wear winter coats for five months so it is worth doing all this work because this coat will get worn a lot. 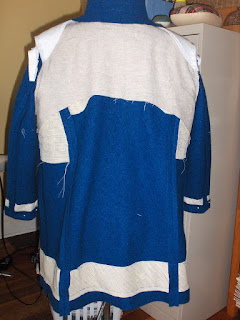 Full photo of the back with all the inner stuff showing. Pretty unsightly, but it will be all covered up with beautiful shiny Kasha lining (flannel-backed satin) in royal blue and none of this will ever be seen again.

I was planning on getting buttons to match the coat in colour, but I am thinking now that I should perhaps go with jet black buttons. The coat looks really plain, and perhaps a contrast button would be a good idea. I am thinking that this coat needs a gorgeous sunny yellow scarf tucked inside the neckline and I am on the lookout for one in the stores. Funny when you want a specific colour in something, it is nowhere to be found. I may have to make one.

More later, I hope to have this finished by Christmas day.

Merry Christmas to all.

Cleaning up the sewing room 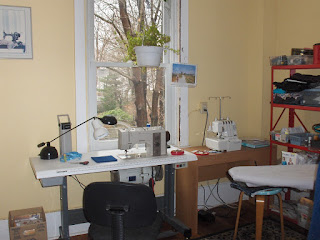 I had a big clean-up of my sewing room two weeks ago. I was finding it difficult, next to impossible really, to go in and sew with so much stuff in there.  It is still quite cluttered and busy compared to other sewing spaces that I have seen online, but it is much better than it was.

The above photo is my main machine, a Bernina 950, a semi-industrial machine that I bought about ten years ago at a sewing show in Toronto. I also have a Husqvarna which I have moved to Ontario to the house we recently purchased there, in preparation for retirement (my husband's retirement, not mine). And I also have a Kenmore 3/4 thread serger which I only use for finishing seams. I am not a serger sewer but I do like to have the raw edges trimmed and looking nice. 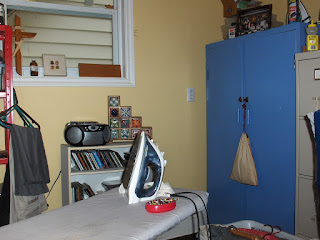 I can now swivel in my sewing chair and use the iron without getting up. I dropped the ironing board so that is at the right level to iron while sitting. The blue wardrobe now holds my out-of-season clothes and some garments that have actually never been worn, special ones that I made for demos in sewing classes. As my friend Brenda likes to sew, "my husband doesn't fish to put food on the table, I don't necessarily sew to put clothes on my back, it's about the process."  Those special garments tell that tale. Perhaps one day I will photograph them and blog about them.
Next to the wardrobe is a filing cabinet that is stuffed with patterns. I culled a bag full a month ago, and have to go through the stash again. Realistically, am I going to sew all of these and so many are old patterns that I wouldn't even consider making them now. 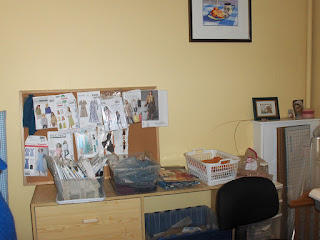 This is the desk that used to hold the second machine and now it provides the surface for projects in the works and also a bulletin board with patterns that I want to sew soon or next or whenever. However I forget to look at it, and go searching through the filing cabinet in search of a pattern that I just remembered. Or else I have bought a new pattern/fabric that jumps to the head of the queue. 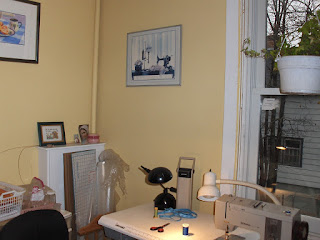 Lots of lights on the main sewing table. The Bernina comes in its own table, I do wish it was wider as large projects slide off while I am sewing. For example, the coat I am currently working on, has to be bunched up in order for me to sew anything on it. 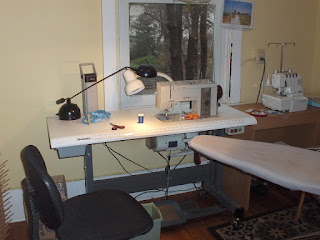 Another view of the main sewing area, with the ironing board strategically placed within easy reach. 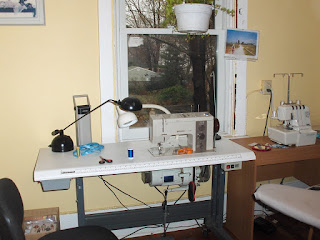 I moved several Rubbermaid containers of fabrics and they are currently in a little office on the same floor until I sort them into the colour-coded containers up in the attic. And while I am doing that, I am actually tossing pieces of fabric and donating them to GoodWill. I must be more ruthless at this, as we are planning a big move in a little over a year and it will be embarrassing to explain why I have so much fabric stashed.

I have found, since sorting out this room, and giving it a thorough cleaning, that I look forward to going in there more and actually sewing. I have a CD player with the music that I love at hand, and I also put in an old laptop so that I can watch YouTube videos while I sew.

This room has had multiple transitions. When we moved into this house 19 years ago, this was our kitchen. My mother lived on the ground floor of the house and we, myself plus hubby plus three grown daughters and two cats, lived on the top two floors. After my mom died, we took over the whole house. This became the bedroom of our youngest daughter and an electrician once joked that she could have her own five-piece band in there, there was so much heavy-duty wiring (from its days as a kitchen). It overlooks the back yard and is the quietest room in the house.

It is ironic that we lived in less space when there were six of us than we now have when there are just two of us plus a dog. This house has seen a lot of life over the past two decades. We are starting the transition to another phase of our lives, with Nick retiring and us moving closer to the grandkids who live in Canada. Our middle daughter has seven kids from age 12 down to newborn, and we recently bought a house in her village where we plan to move once Nick leaves work.

And that house has a finished basement room that has built-in storage, it is the perfect space for sewing and for teaching my grand-daughter to sew. I could even see making quilts in the future. 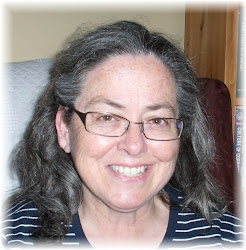